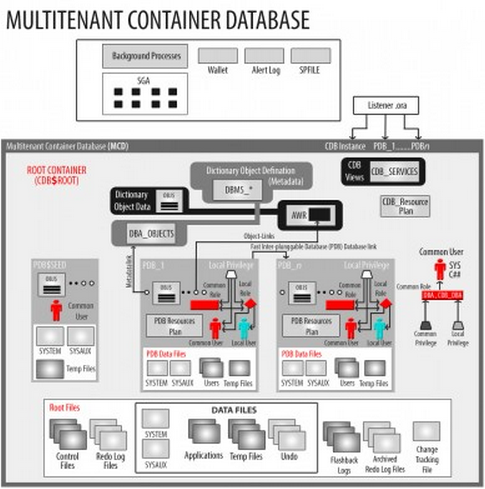 Oracle 12c Database: New Features
The Oracle 12c Database has the most new features ever released with any version of any database. As you might have guessed from it’s name, the new version is more focused on Cloud Computing.

Oracle 12c RAC: New Features
Oracle has come a long way from its inception of the 9i RAC database to its current 12c version. I remember the days when we had to deal with RAC related issues, ranging from performance to stability which gradually improved as this product matured. Learn more about the new feature now available with RAC.

Oracle 12c Database: Online Table Redefinition and Datafile Movement
Moving objects and datafiles around is required when you need to either change the physical location of the data files or when you want to migrate to ASM or some other Storage system. In Oracle 12c this can be minimized to almost no downtime. Let’s look at how online table redefinition and datafile movement can help us in achieving zero downtime.

Oracle 12c Database Heat Maps and Automatic Data Optimization
When installing Oracle Software, you can create 12c CDB, PDB Databases using OUI, just like you used to do in the previous versions of the Oracle database.

Oracle 12c Last login time for Non-Sys Users
Oracle 12c introduced a new, very useful security feature to store and display the last login information for non-sys users, logging in via SQL*PLUS. The last login time is displayed in the banner by default when we log into the database using SQL*PLUS in 12c.

Oracle 12c Database: Moving to Multithreaded Configuration
Starting in Oracle 12c database, you can change this and enable the new Multithreaded configuration! And that too by merely setting one parameter. You can change the architecture by making Oracle database use thread based architecture instead of process based. Once changed, all Oracle processes will be threads within a few Oracle processes.

Oracle 12c Database Default Column Value Enhancement
I remember that a number of times, developers have approached me with the question – How do I auto increment a default value in a table column? These were mostly folks who had worked in the MS SQL, Mysql and other database environments where this features exists. Now, Oracle 12c Default Column Value feature has been incorporated and puts this to rest.

Oracle 12c Database Multiple Indexes On Same Set of Columns
Oracle database 12c has about 500+ new features when compared to 11gR2. Among these features there will be some which get the mainstream attention. But often little caveats or enhancements prove to be as vital as the big ones. One such enhancement is the ability to have multiple indexes on same column or same set of columns. Lets look at this feature and the possible uses cases.