Calculating average when you only have a few entries in your data is one thing but having to do the same with hundreds of data entries is a whole another story.

Even using a calculator for finding the average of this many numbers can be highly time-consuming and to be honest, quite frustrating.

After all, no one likes to insert some hundred entries on the calculator in order to find the average.

If you have landed on this page, it is likely that you are looking for an easier and time-effective way to get about it.

The good news for you is that there indeed is a much simpler, highly time-effective way of finding the average of just as many entries as you can possibly have in your data.

How does the idea of calculating the average of hundreds of entries within a few seconds sound to you?

The look on your face tells us it’s somewhat exciting for you.

Then read along and find out how Microsoft Excel can serve the purpose for you within a matter of seconds.

This tutorial is aimed at explaining the steps to use excel average function.

What Does It Mean To Calculate “Average”?

Arithmetically speaking, an average can be defined as the central value of any given set of data.

The average of a few numbers can conveniently be calculated by adding all of the given numbers and dividing the sum by the total number of numeric values.

For instance, if your data has ten numeric values from 1 to 10, you can calculate the average by adding all numbers from 1 to 10 and then dividing the sum by the number 10.

How To Use Excel Average Function?

Excel Average formula is capable of handling the individual data entries all by itself to automate the process of calculating the average.

Once the data has been entered in excel, it only takes a second or two to calculate the average.

Following are the steps that you need to follow in order to calculate the average of multiple numbers in Microsoft Excel. 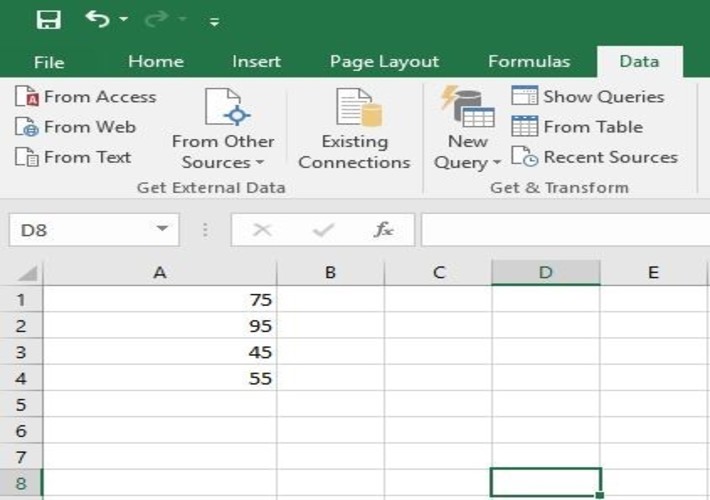 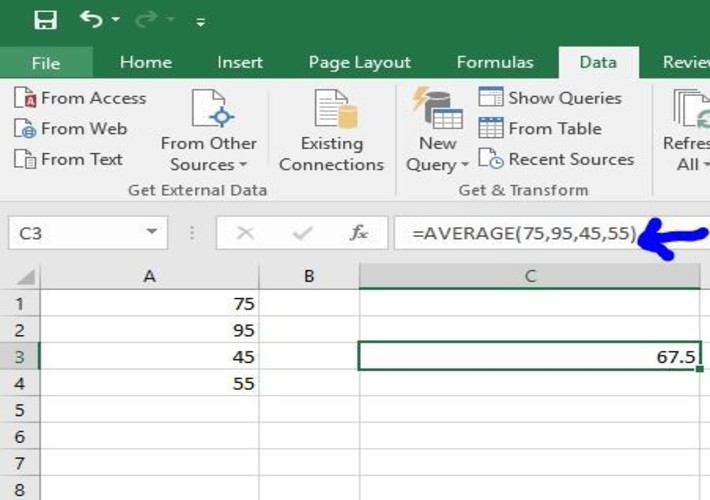 That’s it. That’s all you have to do calculate the average in Microsoft Excel by directly inserting the numeric values.

How To Use Excel Average Formula On Cells?

As evident, the above-mentioned steps for average excel formula are applicable if there are only a few numeric values to be inserted and calculated for average.

But what if you had a huge chunk of data already entered in excel and you wished to find the average of say, a hundred entries?

Would you really prefer to manually insert all of the hundred values in the Average formula separated by commas?

If not, then you are in luck since excel offers a much simpler way to go about it.

Using the program, you can calculate the average of all individual entries in the cells simply by using the cell labels instead of the numeric values.

Here are the steps that you can follow to use average function excel using cell labels: 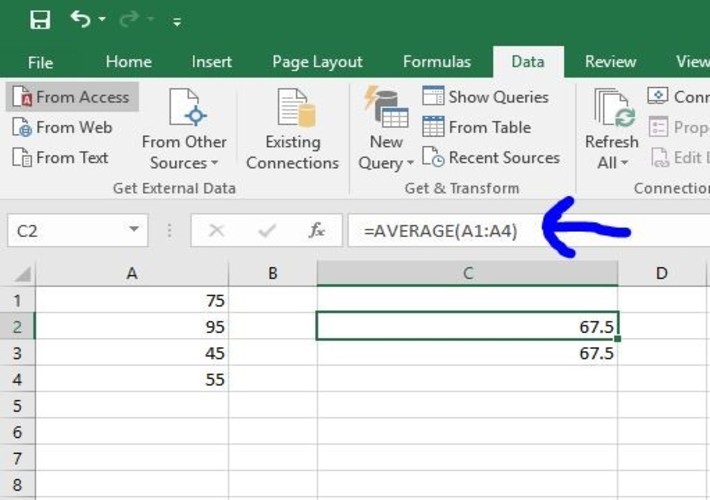 Calculating average in Excel using cells instead of numeric values is much more applicable when dealing with huge chunks of data that has a large number of entries.

Instead of having to enter each numeric value separately, you can simply insert the cell labels of the first cell all the way down to the last cells through which you wish to consider the entries for excel average function.

What You Need To Know About Calculating Average In Microsoft Excel

There are a few basic things that one must understand while calculating the excel average formula.

To begin with, if you have a range of cells that are empty in your data set, there is no need for you to remove such cells before you can calculate the average.

The application is smart enough to automatically skip through these cells and calculate the average for the rest of them which contain numeric values.

Similar is the case for cells which contain logical values such as that of True/False as well as for the ones which consist of textual data.

Take a look at the picture given below for better understanding. 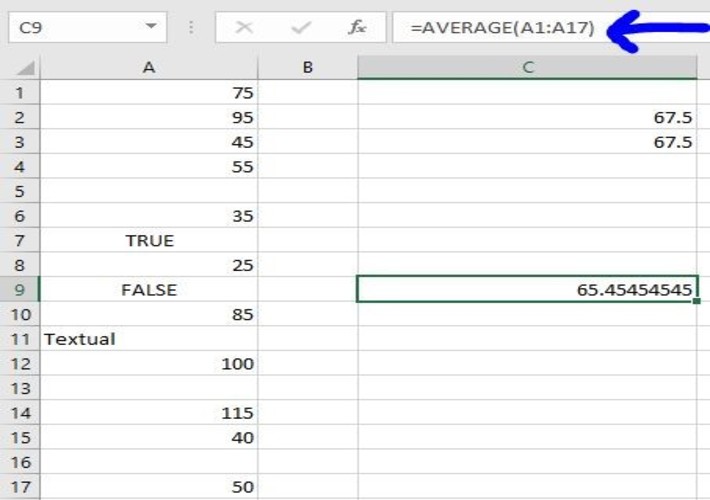 As evident, cell C9 calculates the average of the numeric values in cells from A1 to A17 while it automatically ignores the textual, empty, or logical values in the selected cells.

If, however, you wish to consider the logical values (TRUE/FALSE) as well while calculating the average and would want to assign the value 1 to TRUE and 0 to False, you can make use of the AVERAGEA formula instead.

It is also important to highlight that it is possible to use a mixture of cell labels and individual numeric values while using average function excel.

The best part is that you don’t have to go through a whole new tutorial to how to average in excel. All you have to do is make a minor variation to the average formula.

For instance, if you wish to calculate the average of 6 values in the cells A1 to A6 and a random number, say 17, you can use the following formula to do so:

Take a look at the image given below for better understanding. 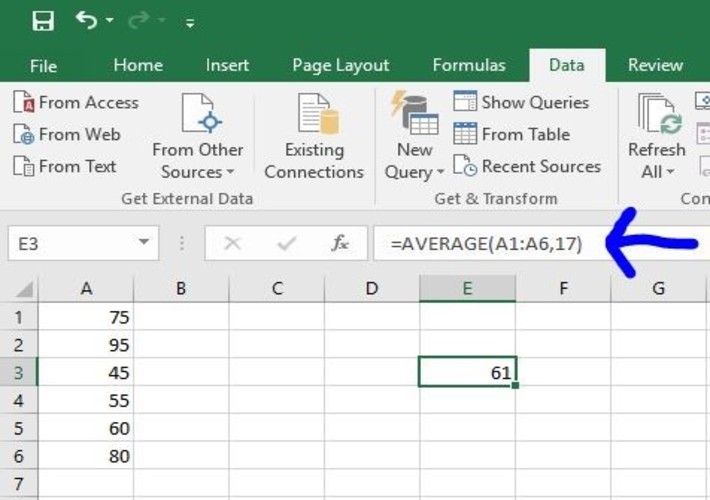 As shown in the formula bar, the typed formula calculates the average of numeric values from cell A1 to A6 and the number 17 which is shown as 61 in cell E3.

Much like a wide range of other features in Excel, there is a limitation to the use of average excel as well.

Although it is not very likely for someone to experience this on a regular basis, but if you happen to be someone who deals with huge chunks of data with a few hundred entries, you may have to use the Average formula multiple times since it is impossible for the application so far to handle more than 225 entries in one go.

Nonetheless, even with the shortcoming, Microsoft Excel would still be remarkably more efficient and convenient for you when it comes to calculating the average of a few hundred numeric entries.

So this tutorial on how to average in excel will still come in handy.

So, here is pretty much everything that you needed to know about the excel average function.

If you are being honest, you would certainly agree that it turned out to be a lot easier than you would have expected.

Don’t take it for granted, though.

Yes, it is convenient. But it will still take some practice before you can get hold of how to calculate average in excel.

Before it skips from your mind again, make sure that you apply it on a few of your data sets for better understanding.

While practicing the excel average formula, if you come across a complication or a query, please leave a comment and our experts will get back to you as soon as possible.