« Previous Post
Next Post »
With the introduction of the new features in Oracle GoldenGate 12c, the configuration and management of replication has become much easier. It provides support for Oracle 12c multitenant database, more secure authentication and much better performance management options. Most of these features however require the database to be at 11.2.0.4 version or above.

Here are a few highlights of the new features available with GoldenGate 12c Software.

1. Replication: Coordinated Mode – For environments where there is a large number of transactions against a table or a group of tables, the RANGE function has traditionally been used to improve performance of the replicats. Management of this requires quite a bit of effort, especially when this is done on a group of tables which have relationships with each other. The need for this in most situations is eliminated by the introduction of the Coordinated Replicat in GoldenGate 12c. This allows the replicat to process transactions in parallel similar to a multithreaded process. The coordinated replicat feature is able to handle referential integrity, applying the records to the table in the correct order.
To enable Coordinated mode Replication the COORDINATED parameter needs to be specified in the parameter file. The THREADRANGE parameter is used in conjunction with COORDINATED parameter to specify the thread number to be assigned to the process. The SYNCHRONIZE REPLICAT can be used to synchronize all these threads to the same position in the trail file.

2. Replicat: Integrated Mode – With Oracle Goldengate 11g, the Integrated Extract mode on the source database was made available. In GoldenGate 12c, the Integrated Replicat Mode has also been introduced for use on the target database. With Integrated Replicat the Logical Change Records (LCR’s) are created and transferred to the inbound server which applies them to the database.
The DBOPTIONS parameter with the INTEGRATEDPARAMS(parallelism n) option needs to be used to create the Replicat in Integrated mode. Here the parallelism is specified where ‘n’ is the number for parallel processes to be used.

3. Multitenant Support: 12c Database – To support the specification of objects within a given PDB, Oracle GoldenGate now supports three-part object name specifications. Extraction and Replication is supported using the TABLE and MAP statements with other parameters and commands which accept the object names as input. The format for these parameters is container.schema.object.
Three-part names are required to capture from a source Oracle container database because one Extract group can capture from more than one container. Thus, the name of the container, as well as the schema, must be specified for each object or objects in an Extract TABLE statement.
Specify a three-part Oracle CDB name as follows:
Syntax: container.schema.object
Example: PDB1.HR.EMP
Oracle GoldenGate supports three-part names for the following databases:
• Oracle container databases (CDB)
• Informix Dynamix Server
• NonStop SQL/MX
Alternatively to be able to be backup compatible the two naming scheme SCHEMA.OBJECT is still supported with the use of the SOURCECATALOG database name. Below is a sample of the entry required in the parameter file.
SOURCECATALOG plugdb1
MAP schema*.tab*, TARGET *1.*;

4. Security: Credential store – The username and encrypted password login credentials are no longer required to be encrypted and can securely be stored in a database wallet. Reference to this login information is made via an alias.

6. DDL Replication: Native Capture – For capturing DDL operations, the DDL trigger mechanism has been replaced by a new triggerless capture method. This allows support of additional DDL statements which was not previously possible.

7. Installation: Using Oracle Universal Installer (OUI). The installation mechanism no longer uses the untarring of the binaries, rather it uses the OUI, much like most Oracle products. 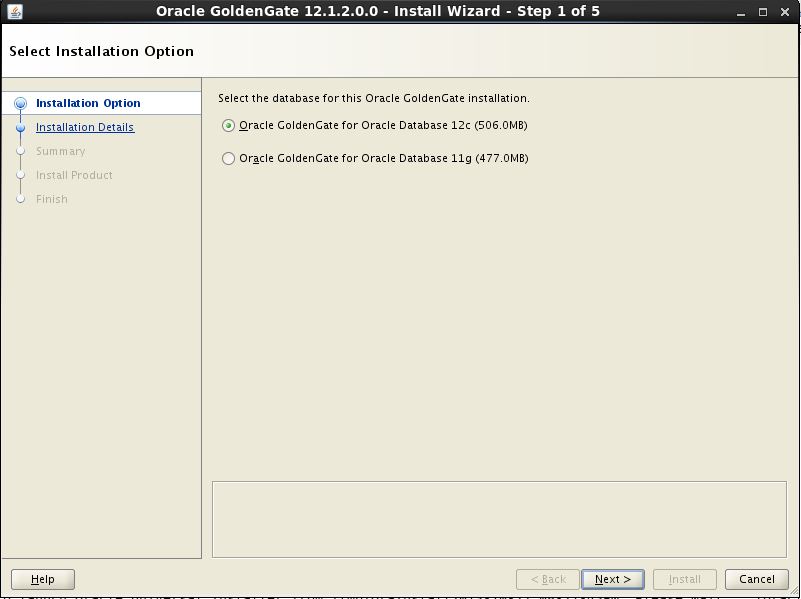 9. Remote task data type support: Remote task now supports all Oracle data types, including BLOB, CLOB, NCLOB, LONG, UDT, and XML.
A remote task is a special type of initial-load process in which Extract communicates directly with Replicat over TCP/IP. Neither a Collector process nor temporary disk storage in a trail or file is used. The task is defined in the Extract parameter file with the RMTTASK parameter.
This method supports standard character, numeric, and datetime data types, as well as CLOB, NCLOB, BLOB, LONG, XML, and user-defined datatypes (UDT) embedded with the following attributes: CHAR, NCHAR, VARCHAR, NVARCHAR, RAW, NUMBER, DATE, FLOAT, TIMESTAMP, CLOB, BLOB, XML, and UDT. Character sets are converted between source and target where applicable.

12. Automatic discard file creation: By default, Oracle GoldenGate processes now generate a discard file with default values whenever a process is started with the START command through GGSCI. However, if you currently specify the DISCARDFILE parameter in your parameter files, those specifications remain valid. If you did not specify DISCARDROLLOVER along with DISCARDFILE, however, your discard file will roll over automatically every time the process starts. This automatic rollover behavior contradicts the DISCARDFILE [APPEND/PURGE] option because the new default is to rollover.

Back to GoldenGate Homepage